Thank you, John Lennon and Paul McCartney, for the lines to sum up my initial reaction upon finishing my Digital Learning and Leading coursework (1968). It’s an image that leapt immediately to mind–I reached the bottom of an 18-month-long ride, and now it’s time to climb back up and go for another, as I start to make use of what I’ve learned and search for the next thing to explore.

Sometimes I look at where I am right now, and think about where I was in July of 2018 when I started down this path, and I feel like July 2018 Bryan and December 2019 Bryan would barely recognize one another. The week that I started this program was an insane week that I still remember. The months leading up to that week had been personally and professionally challenging–I was processing the end of a 13-year marriage, a school year that had been one of the most frustrating of my nearly two-decade career, and a health scare, among other things. To say that I was primed to make some changes would be putting it mildly. Which is why in mid-July 2018 I found myself starting a graduate program in a field that, a year before, would have barely been on my radar. It’s also why I found myself in the opening week of performances for my first turn as a cast member in a musical AND starting tap dance lessons, but those are other stories entirely. Suffice it to say that I followed the “in for a penny, in for a pound” philosophy when it came to starting down paths I had always figured were unlikely at best.

And here I am, 18 months later…which seems like both a blip and an eternity. In a lovely bit of cosmic symmetry, this week, as I conclude my graduate studies (for now?), I will also wrap up the closing week of performances for my SECOND turn as a cast member in a musical. After which I will start 6 weeks of swing dance lessons. And I will begin updating my resume as I start to search in earnest for new career opportunities. Two years ago I would have said that I fully expected to retire from education as a classroom music teacher. There are far worse ways to spend a career, and I’m proud of nearly every second of it. But going through this program has made me realize that I have other talents to offer and other ways to serve. I can break down my own learning process, improve it, and help others do the same. I can guide organizational change. I can design curriculum that is targeted at specific objectives, and break down ways in which it succeeds in meeting those objectives and which ways it could be improved. I can assist and lead my colleagues as they work toward the goal of helping others learn. Not bad for a guy who sat in a practice studio 25 years ago and said, “I think I’ll go ahead and become a guitar teacher.”

You can take a tour of my DLL learning journey using the presentation below.


I’ve been a classroom teacher for 21 years. 18 of them have been spent in the very same building. The other day I was in our school’s front office, and I happened to see the faculty photo from my very first year. Of a staff of about 125 people in that picture, I counted just under a dozen who still work in the building today. Somehow I went from fresh-faced rookie to grizzled veteran in what feels like weeks.

Torres (2014) states that one of the key questions that defines 21st century leadership is “Are you courageous enough to abandon a practice that has made you successful in the past?” As soon as I can officially add the letters M. Ed. to my title, I’m updating my resume and beginning my next career search in earnest. Success in this means leaving behind a career role that’s old enough to buy beer, and a job position that’s old enough to vote. I don’t know that I would necessarily call that “abandoning” the past, because those experiences have indelibly shaped who I am and I couldn’t separate myself from them even if I wanted to. But it is leaving behind the comfortable in favor of the uncomfortable. After two decades, I feel like I know how to teach guitar, or conduct an orchestra. I know how to lead a class of budding young music producers through the process of coaxing their musical ideas into reality. I’m proud that I have enough experience with this that I could walk into any room full of young musicians and feel comfortable that I would know how to help them make better art. It’s time to start figuring out how to do that with a room full of fellow teachers, of all grade levels and disciplines, in all kinds of learning environments.

It’s time to be a fresh-faced rookie again.

Torres, R. (2014), February 19). What it takes to be a great leader [Video file]. Retrieved from https://www.youtube.com/watch?v=aUYSDEYdmzw&feature=youtu.be

I am an instructional technologist for the Virginia Commonwealth University School of Dentistry in Richmond, VA. Before that, I spent more than 20 years as a public school music teacher in Chesterfield County, VA, primarily teaching guitar and music technoogy at the high school level. I hold a Bachelor of Music Education degree from the University of Richmond, and a Master of Education degree with a focus on Digital Learning and Leading from Lamar University. I believe that every person has the need, the desire, the ability, and the right to learn, and that as educators we must meet our students wherever they are, and help bring them to where they want and deserve to be. 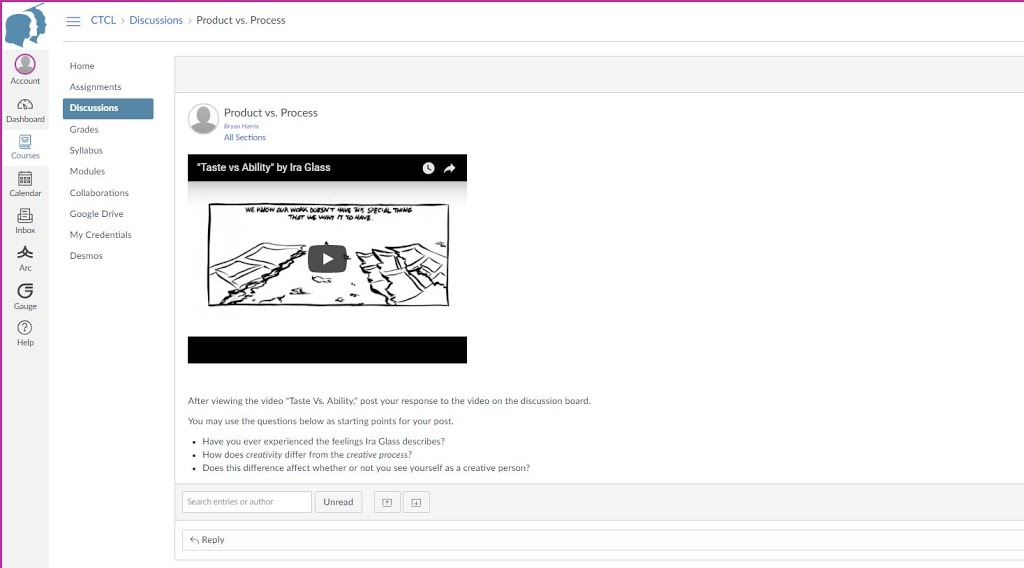